We have found and sourced some of the best shared and compelling employee engagement best practices articles for your interest. Happy Reading.

Interactive Employee Engagement ROI Calculator that can easily show you the real impact of having a disengaged workforce.

Companies need happy employees to survive and be sustainable; we have not been replaced by drones and computers (yet!).

As a leader or manager, it is important to understand that what you do and how you act can influence and impact your employee happiness and engagement level.

Download this checklist to learn 8 fundamentals Managers need to know to make their Employees Happy! 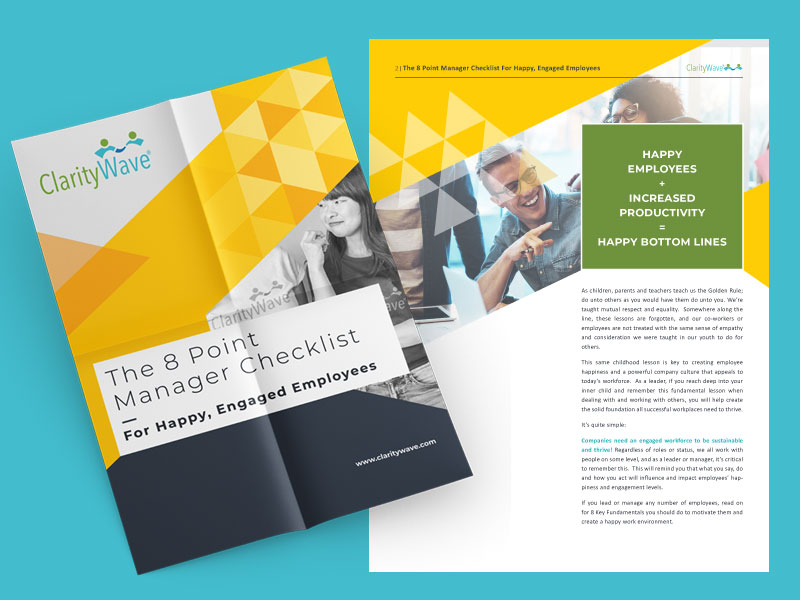 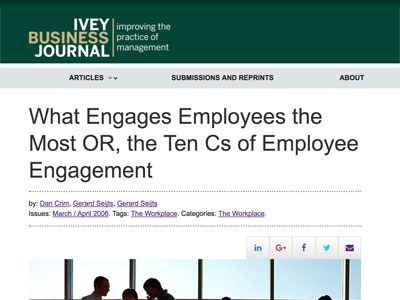 What is Employee Engagement

An engaged employee is a person who is fully involved in, and enthusiastic about, his or her work. In his book, Getting Engaged: The New Workplace Loyalty, author Tim Rutledge explains that truly engaged employees are attracted to, and inspired by, their work (“I want to do this”), committed (“I am dedicated to the success of what I am doing”), and fascinated (“I love what I am doing”). Engaged employees care about the future of the company and are willing to invest the discretionary effort – exceeding duty’s call – to see that the organization succeeds.

Is Your Workplace Productive? 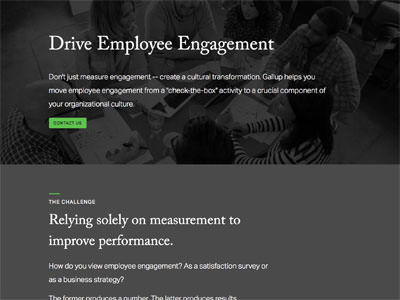 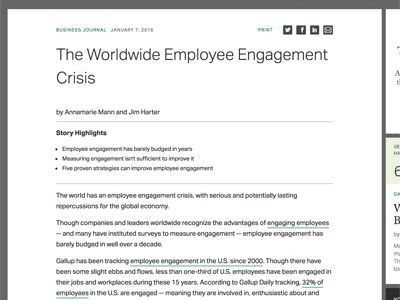 The world has an employee engagement crisis, with serious and potentially lasting repercussions for the global economy.
Though companies and leaders worldwide recognize the advantages of engaging employees– and many have instituted surveys to measure engagement — employee engagement has barely budged in well over a decade.

The Employee Experience Is The Future Of Work: 10 HR Trends For 2017

Today, almost every company is undergoing a digital transformation. Cloud and mobile computing, artificial intelligence, and increasing automation have created the potential to transform nearly every aspect of a business. A survey of CEOs conducted by Fortune asked whether they thought their company was a “technology company” and 67% of CEOs said yes. 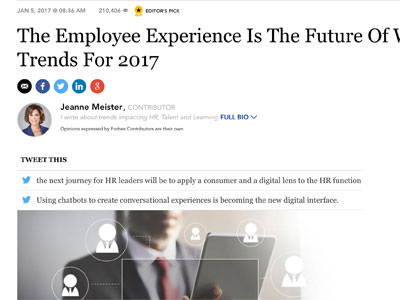 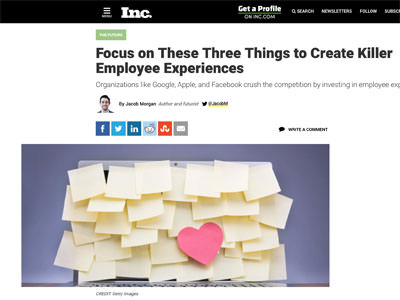 Focus on These Three Things to Create Killer Employee Experiences

We are in the midst of a major transformation in the workplace. In the industrial era, the focus was on task-oriented laborers whose primary output came from their hands. In the information age, knowledge embodied in employees became a central component of the economy.

Now we are entering the cognitive era. In this new era, in which machines are able to learn, reason and interact with humans naturally,1 the boundaries between people and technology become blurred.

Rather than diminishing the role of people, in the cognitive era people are at the forefront of working with and realizing the benefits from new technologies to achieve more than was ever possible before. In fact, the cognitive era is just as much the human era. It is a time when work can be a more rewarding experience for employees.

Recognizing that “the battle for the hearts and minds of employees is played out daily through their workplace experiences,” organizations are now reexamining their employees’ experience at work. 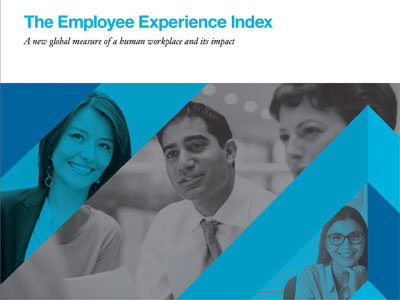 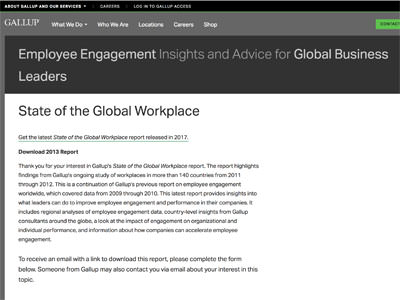 State of the Global Workplace 2017 - Gallup

85% of employees worldwide are not engaged or are actively disengaged in their job. Discover what organizations everywhere can do about it.

State of the American Workplace - Gallup ​

STATE OF THE AMERICAN WORKPLACE presents an unparalleled look into the modern workforce. The report is based on Gallup’s in-depth research and study and was created to help business leaders optimize their attraction, retention, engagement and performance strategies in a time of extraordinary change. 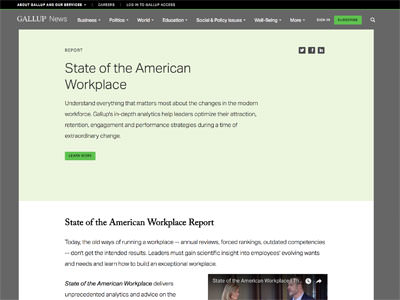 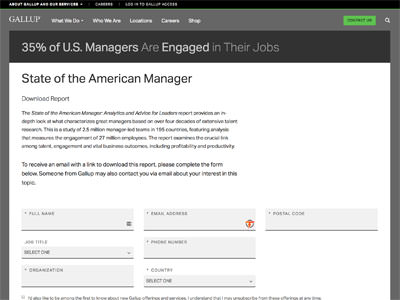 State of the American Manager - Gallup

The State of the American Manager: Analytics and Advice for Leaders report provides an in-depth look at what characterizes great managers and gives organizations the knowledge to find, hire and develop more great managers using Gallup’s accumulated analytics and advice as their guide

TRY IT FOR FREE